(added one more thing to list of Do's & Don'ts, & clarified "But what about cell balance..." section)

In case of future changes, the most up-to-date version of this article will be available at its original posting location here: http://electricrcaircraftguru.blogspot.com/2013/01/parallel-charging-your-lipo-batteries_22.html.

Why Use Parallel Charging? 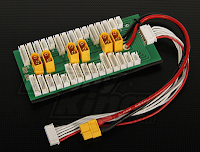 I use a Triton 2 EQ 100W balance charger (http://www3.towerhobbies.com/cgi-bin/wti0001p?&I=LXVZA8&P=ML [Note: I don’t really recommend this charger, I just bought it before I knew much about chargers.  This thing is ridiculously expensive for what it does and has some silly quirks, occasional bugs, and outdated firmware]) to regularly charge up to 8 2S 500-1000 mAh packs simultaneously, all in just over 1 hour! I also regularly charge 3S LiPos and micro 1S Lipos (I’ve done up to 14 of those at once) simultaneously using that one, single-port charger. This is called parallel charging. Essentially, parallel charging allows you to plug in many batteries at once, into one port in a single charger, and, if your charger is powerful enough, charge them all in ~1 hour or less.  All at once—boom, done!  No more messing around buying many chargers or setting up the charger many times to charge multiple batteries.  I use this charge board (shown above) plus a couple other parallel adapters I plug into it.  If you use Deans connectors, use this board instead.  The board by itself is designed for only up to 6 batteries at once, so I added a couple parallel harnesses to get 8. However, YOU MUST KNOW WHAT YOU ARE DOING OR PARALLEL CHARGING IS DANGEROUS. For example, if you plug a 2S battery in with a 3S battery, the 2S battery will be destroyed and catch fire if you leave it there.

One thing that annoys me very much about virtually all local hobby shops is that as of today, 22 Jan 2013, I haven’t found a single one that uses parallel charging or sells parallel charging equipment yet, and yet I’ve been into about 12 local shops in the past few years and looked specifically for parallel charge equipment.  This charging technique has been around for probably 6 years, and is very effective and safe when done right, so I have to assume that most local hobby shops are either A) completely oblivious about parallel charging, B) do not want to promote it because it is better for them to sell another charger rather than a parallel charge board (ie: they’ll make more money selling another charger), or C) they secretly use this technique at home but simply don’t want to be responsible for user error if a customer destroys their equipment or property if they don’t know what they’re doing while attempting it. 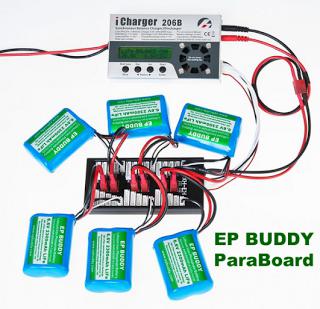 Despite this, I am a strong proponent of parallel charging and have used it nearly every charge I’ve ever done since I discovered it in the early part of 2011.  I am always recommending to people that they use parallel charging, as it allows any single port LiPo charger to charge many batteries at once instead of just one battery at once.  With the right harness, even a cheap $5 2-3S LiPo charger can do parallel charging!  (However, this is less useful since these low-power chargers don’t have enough power to maintain a 1C charge rate anyway).  So, let’s get started.

What is parallel charging?

Parallel charging means that you plug many LiPo batteries into each other via a special board or harness so that all of their negative leads are connected to each other, and all of their positive leads are connected to each other.  Now, the entire battery packs are in parallel.  In order to balance the cells with your charger, however, the balance wires of all of the batteries must also all be connected in order to put the individual cells in parallel with each other.  WARNING: YOU CAN ONLY PARALLEL CHARGE BATTERIES OF THE SAME CELL COUNT (or the lower cell count battery will catch fire), AND SIMILAR STATE OF CHARGE (or damage to the lesser-charged battery will occur).  When many batteries are connected in parallel, the charger “sees” all of them as a single, large battery, with a capacity equivalent to the sum of their individual capacities.

But what about cell balance—how does parallel charging really work?
In nature, whenever a gradient exists, a natural balancing process will occur.  A gradient means that there is a high concentration of something as compared to a low concentration of that same thing near it.  For example, if you pour salt into still water, the area of water where the salt is will become very salty.  The rest of the water lacks salt, so this “salt gradient” will naturally cause the high concentration of salt to balance out, or diffuse, into the water with a low concentration of salt.  The same occurs with heat.  Heat will naturally diffuse from a hot area into a cold area, attempting to find a balance.  If the hot area always remains hotter than the colder area, it is not because the heat isn’t diffusing, but rather it is because a heat source exists at the hot spot, and there is a resistance to the heat flow preventing it from fully diffusing.  Pressure also follows this natural balancing process.  Take a blown up balloon, for example, and untie it.  There is a large pressure difference (or gradient) between the air in the balloon, and the air in the room.  The high-pressure air in the balloon will rush out into the lower-pressure air in the room, diffusing the high pressure into the lower pressure until an equilibrium pressure is achieved.  Electricity also follows this principle of diffusion.  The battery with the higher voltage will naturally push its charge (electrons) into the batteries with lower voltage, when plugged in parallel, until all batteries equalize to the same voltage.  Since the individual cells of each battery are also in parallel with the individual cells of all the rest of the batteries, when the balance leads are connected in parallel (by plugging them all into a parallel charge board), all of the strings of cells in parallel will also equalize to the same voltage.  Now, when you plug the entire parallel charge board balance lead into your charger, your charger will balance out the cells of each battery as if it was simply one large battery.  The charger will "see" the first string of cells in parallel as a single "Cell 1," and the second string of cells in parallel as a single "Cell 2," and the third string of cells in parallel as a single "Cell 3," etc., balancing them as if they were individual cells of a larger capacity battery!  The result is that in parallel charging, all cells come out properly balanced so long as the cells are not damaged, your charger is functioning properly, you plugged them all in properly, and nothing else is wrong!

3)      Use batteries with similar states of charge (how much they are charged/discharged). Ex: do NOT put a 1/2 full or 3/4 full battery in parallel with an empty battery. All batteries must be at similar discharge state.  SEE PLOTS BELOW FOR MORE INFORMATION.

4)      Use batteries of similar ages. Ex: it is not as advisable to put a new battery with a 2 year old battery, but not critical as long as the batteries are similar capacities (mAh ratings), the same cell count, and at similar discharge states.

6)      Be VERY CAREFUL to plug in the main leads and balance leads correctly.  Attempting to plug them in backwards will cause a short circuit and a spark, and potentially damage your batteries and/or your parallel charge board or battery leads.

7)      Once all batteries are plugged in together in parallel, wait several minutes (3~10 minutes or so) for them to equalize their voltages.  The farther apart the batteries' charge states, the longer you should wait.

9)      It is recommended to use a fire-proof LiPo-Safe Charge bag when charging, such as this one here.  I like to place the entire charge board with all of the attached batteries, if possible, inside of the same charge bag.  If the batteries are very large, and this is not possible, feel free to separate the batteries into separate charge bags.  Note: charge bags have a special slit in the side, near the velcro, to allow the cables to come out of the bag, so placing the entire charge board, or individual attached batteries, into a charge bag is not a problem.

Feel free to Google for more info on "parallel charging" of LiPo packs. Again: this method is NOT recommended for NiMh or NiCad cells, as it may cause them to catch fire, though for LiPos it works great!

Parallel charging all these batteries at once with only 3 chargers! 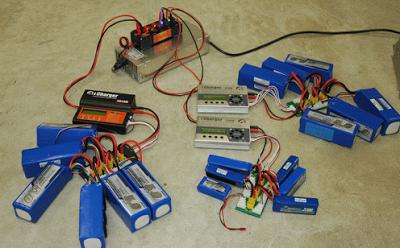 PLOT IS FOR LIPO BATTERIES ONLY,

And is only an ***approximation*** 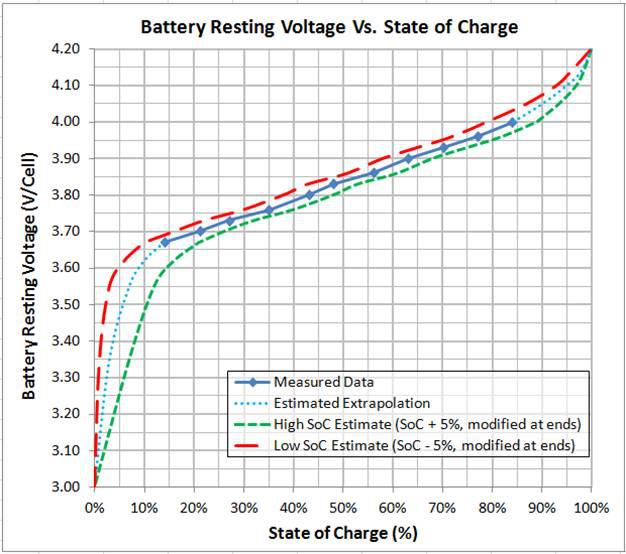 AS LONG AS THE BATTERIES ARE WITHIN ~25% (OR LESS) STATE OF CHARGE OF EACH OTHER, THEY MAY BE PARALLEL-CHARGED TOGETHER.   If they are more than ~25% apart, the higher-charged battery will push a current into the lower-charged battery equal to or greater than a 1~2C charge current, which is bad.

(To know for sure how much current the higher-charged battery is pushing into the lower-charged battery, and to see when they are nearly equalized, I like to hook up a power meter in between the parallel charge board and the *lowest-charged* battery, then I plug the remaining batteries into the parallel charge board, once at a time, beginning with the one that is least-charged and plugging in the one that is most-charged last.)

Also, after plugging in all main battery leads in parallel to each other, it is best to let the batteries’ voltage equalize for a few minutes before plugging in the balance leads in parallel and beginning the charge.  The chart below is just a rough estimate of how much time is recommended to let the batteries equalize their voltages prior to plugging in their balance leads and starting the charger.  Note: State of charge range = most charged battery State of Charge – least charged battery state of charge.  Ex:  If the most full battery is at 50% and the least full battery is at 30%, the state of charge range is 50% - 30% = 20%. 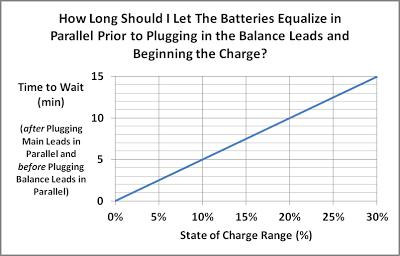 See my extensive article I wrote, titled “The Details of Electric Radio Controlled Aircraft,” under the “Battery” section of the document (approximately pgs. 22-35), found at my main website here:  https://sites.google.com/site/electricrcaircraftguru/.  Also, again, the above article can be found on my blog here:  http://electricrcaircraftguru.blogspot.com/2013/01/parallel-charging-your-lipo-batteries_22.html.

You Tube Videos Before 2013